Our mission this week is to spread the word about how dangerous kitchen fires can be — and provide safety tips that can prevent them. Did you know that …

1. More fires start in the kitchen than in any other place in the home. Two of every five home fires start there.

3. Multitasking while cooking is not a good idea. Unattended cooking is the leading cause of cooking fires, responsible for one-third of them.

4. Frying is the #1 activity associated with cooking fires. Cooking oil or grease can easily catch fire if it gets too hot — and because frying is typically done in an open pan, a fire can spread easily once it starts..

5. The most common equipment involved in home cooking fires? Ranges or cooktops, which accounted for 58 percent of fires. Ovens accounted for 16 percent.

6. An electric range is more dangerous than a gas range. That’s because, with an electric range, it may be less obvious that a burner is on — and because burners on electric ranges stay hot for a period of time even when turned off.

7. Microwave ovens are more dangerous than you think. They’re one of the leading home products associated with scald burn injuries, accounting for 44 percent of the microwave injuries seen in emergency rooms in 2011.

8. In the kitchen, it usually isn’t fires that burn young kids. More often, it’s contact with a hot stove or pans or a scald from hot cooking liquids or steam. In fact, children under age 5 accounted for 55 percent of tableware scalds, 42 percent of contact burns from ranges or ovens, and 34 percent of microwave scalds in 2011.

9. What you wear while cooking makes a difference. Though loose clothing was the item first ignited in only 1 percent of home cooking fires, these incidents accounted for 16 percent of cooking fire deaths.

10. Taking matters into your own hands can make matters worse. Three out of five people who were injured during cooking fires were injured while trying to fight the fire themselves.


To Be Safe Steps

Fortunately, there are steps you can take to keep your family safe.

2. Keep an eye on what you fry. If you have to step away from the stove, turn it off.

3. Keep things that can catch fire — such as dish towels, potholders and paper towels — away from the stove. And avoid cooking in your bathrobe — the loose sleeves can catch fire easily.

4. Keep hot things away from the edges of tables and counters.

5. Open microwaved food slowly, and keep the food away from your face.

6. Have a “kid-free” zone of at least 3 feet around the stove and anything hot — and never hold your child while you’re cooking or carrying something hot.

7. Teach kids to stay away from the stove and hot foods.

9. Install smoke alarms in the kitchen, outside each sleeping area, inside each bedroom, and on every level of your home (including the basement).

10. If you have a fire, just get outside, stay outside and call the fire department. 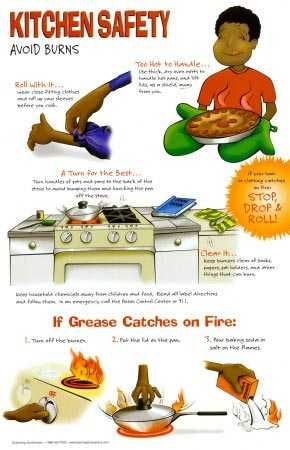